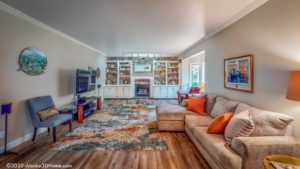 Neal Fried, who I spoke to yesterday, attributes the residential market’s stability to the $3.5 billion influx but also to what he called ‘low expectations’. “After all,” he said, “the market has been stable, but under performing  for the past few years.  Low interest rates are also supporting the market.”    Freddie Mac’s chief economist has a similar take.  “Stimulus is flowing through and sustaining consumer spending and balance sheets for now, but there is concern that a fiscal cliff is just around the corner and may put the brake on recovery,” he said.  However, he does not expect an uptick in foreclosures in 2020 or 2021 due to federal forbearance.  Here in Alaska, the last reported foreclosure rate was only 0.37%, one of the lowest in the nation.

Laura Goodman, co-director of the Housing Finance Policy Center at the Urban Institute said recently, “Homeowners have been much less affected by COVID-19 than renters.”  This is certainly true in Alaska  as many renters rely upon season jobs in tourism and hospitality—industries that have been hardest hit by  state and local ‘hunker down’ orders that are now lifted but for many small business owners and laid off employees the damage has already been done.  Locally, some multi-family property owners are reporting a vacancy factor as high as 25%.

The big question is what happens after the $3.5 billion  runs its course through the state’s economy.”  Nobody has the answer to that question because it’s all up to the local, state and federal elected officials. On a per capita basis, Alaska ranks among the top tier of states receiving funds. And we’re grateful to be sure. But just like last week’s statistics point out, there’s no doubt that Anchorage, the state and nation are headed to a widening gap between well-to-do homeowners and those who struggle to pay their rent and who may be subject to eviction in the coming weeks and months.