You are here: Home / Uncategorized / A Look Back at 2018’s New Construction Stats 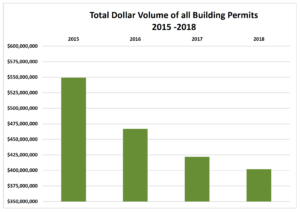 All the state and local economists have predicted Alaska’ recession will end the latter part of 2019.  Let’s hope so for the sake of the new construction industry which has lost over 900 jobs in the past three years. This chart shows an average 22 percent decline  in dollar volume for all new building permits issued by the MOA over the past three years.  Those permit values include single family, duplex, multi-family, commercial and remodeling/alterations. In particular, there have been less than 200 single family permits for each of the past three years, compared to 276 in 2015 or on average more than a 25% decline. Duplex permits have also had a substantial decline. Also hard hit has been the multi-family category which peaked at 369 units in 2015 and has had more than a 50% decline per year since then.

The average single family building permit has a value of $391,757 which does not include the cost of the land. The average duplex permit is $507,034. The MOA doesn’t differentiate between a duplex built for a single owner vs. a duplex condo where each side is sold separately. The vast majority of duplex permits are for the individual units sold separately which have an average value of $253,517. This number also does not include a land value. For comparison sake, the average single family home sold in 2018 for $371,883. There were 921 condos sold in 2018 for an average price of  $204,631. However, that value included smaller stacked condo units as well as duplex condos which are townhouse style. These runaway construction costs are directly attributable to Anchorage’s land scarcity, increased regulation for both vertical and horizontal construction and higher material costs. Despite the lack of construction jobs, labor costs continue to rise as many sub and specialty contractors moved to the lower 48 where their skills are in high demand.

Anchorage’s most prolific single family builders include Spinell Homes and Hultquist Homes. They are also Anchorage’s top duplex builders. Spinell had a total of 48 units while Hultquist Homes had 38. The most popular new home communities include WestGate, Alyeska Basin, Resolution Pointe, Denali Estates, the Terraces, Huffman Timbers, Eagle Crossing and Powder View. The competition for buyers is not so much between builders or communities but with the resale properties which on average have a lower asking price by as much as $100,000 for the same square footage. Nevertheless, buyers love new not only because of new’s higher energy efficiency standards but more contemporary changes in floor plans on how space is utilized and lower maintenance and unexpected repair costs.