You are here: Home / Real Estate Blog / Have Interest Rates Had a Negative Impact on the Residential Real Estate Market 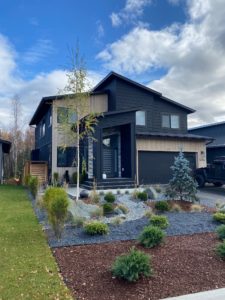 Sometimes I forget that the Municipality of Anchorage (MOA) is more than the Anchorage Bowl.  Its 1,947 square miles stretching all the way to Portage and north to Eklutna.  We all  tend to be a bit myopic and get comfortable with our favorite Costco or coffee stand but the reality is we are more than the Anchorage Bowl and the thirteen MLS districts.   Our population is 288,121.  The MOA is home to 118,285 housing units.  The average age of our single family homes is 42 years which is great for remodelers but not so much for first time home buyers who innocently invest in an aging home instead of paying the higher price for a brand new one.  I advise buyers to be careful when purchasing a home prior to 1992 which is when Anchorage adopted a 4* energy rating.  After that, it became four star plus and prior to 1992 there was no energy rating at all. Today’s energy rating is five star.

Anchorage home prices withstood the pandemic and home values increased by 20.25% in the last three years thanks to historic interest rates as low as 2.3%.  Now rates are almost 7% and may even rise again before the end of the year.  So what has happened to our housing market after the Fed started raising rates in March?  From March to September, single family sales declined 17%. Interestingly enough during the same time period, we experienced a 17.6% decline in active inventory so it’s hard to say whether its rates or lack of inventory that created the decline. Many owners remodeled a space in their garage for a workout area and the spare bedroom into a home office. BUT, the rising interest rates did not detour the average sales price from increasing 3.63% during the last seven months. Although, it did fluctuate wildly from March to September ending up at $441,149 in September from a May sales value of $491,476, down 10%.

The MOA like much of the rest of the country is experiencing a lack of inventory which, in itself, will prevent homes from losing value.  People ask me at the grocery store, in the parking lot, friends at brunch, when will prices come down and my answer is they won’t.  We can’t build our way out of our lack of inventory.  We don’t have enough builders or land.  If you want a moderately priced home drive to the valley which is geographically 13 times the size of the MOA.  And it is not always about affordability.  A brand new Intelligent Design home just closed yesterday for over $1 million in Palmer, Alaska!  And on the other end of the spectrum, there are only TWO, yes TWO, condos for sale in the Mat-Su.  Anchorage condos have declined from  243  in September 2021 to 83 in September 2022.  Right now there are only 20 new construction condos  for sale—8 are finished; 6 are under construction; and 6 are TBB, or a builder’s wishful thinking.

During the Anchorage Parade of Homes, I drove every new subdivision.  Well-designed, spacious hillside homesites with phenomenal views, some just hugging the side of the mountains.  But with the average building permit now over $500,000 and the cost of acre lots well over $225,000, Anchorage doesn’t have just a housing crisis for work force and affordable housing but the missing middle.  There is no current way to bridge the gap between the average resale value of $441,149 and the new construction price of $750,000.  That’s a quarter of a million dollar gap that I’m not sure even relaxing regulations can fix. Perhaps, our neighbor to the north has got it right.  Build it and they will come.