You are here: Home / Market Trends / Let’s Not Forget About Our Neighbor to the North 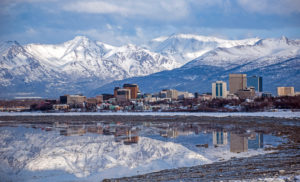 Alaska has a total land area of 586,048 square miles which makes it one-fifth the size of the entire continental United States.  The Mat-Su Borough alone is about the size of Ireland.  But Anchorage is confined by the mountains and Chugach State Park, the two arms of Cook Inlet and Elmendorf Air Force Base and Fort Richardson.  As residential land becomes scarcer and more expensive, and more costly to develop due to varying topography, wetlands and drainage issues,  surrounding areas such as Eagle River and the Mat-Su have benefited with population growth.   Together, Mat-Su and the MOA  account for more than half of Alaska’s population of 728,903. However, when you segregate the Municipality of Anchorage from the Mat-Susitna Borough, you begin to get a different economic  and housing perspective between the two neighbors.  Mat-Su has had continued population increases  of 18,086 residents while Anchorage has had over a 10,000 population loss over the past several years.

Due to its confined land mass, the MOA is falling behind the Mat-Su in building new homes for our shifting south central population. In 2016, the Mat-Su Borough had 44% of all new homes built and that trend has continued to today.  Anchorage is in a deep slumber with less than 200 single family housing starts for the past several years while areas such as the KGB and Palmer-Fishhook has boomed with acre lots large enough for wide shallow homes and 1,000 square foot garages.  Some of the most architecturally attractive homes are now  built in the Mat-Su while Anchorage, due to its diminishing supply of land suitable for housing, is faced with 50 foot wide single family lots and duplexes and four plexes with each unit being sold as condos.  Anchorage has become the urban center of Southcentral Alaska while the Mat-Su is now the suburban capitol of the state.  However, the Mat-Su is beginning to face the same housing crunch as Anchorage with only 254 single family homes for sale in the entire Borough in October.  That number is less than half the 557 homes available for sale in October 2017.  And its average YTD  sales price of $368,085 has increased 15.44%  compared to Anchorage’s 7.5%.  Land values have also increased with a ‘Borough’ acre lot now valued at $84,000 without well and septic systems.  Those costs will bump up the average new construction home in the Mat-Su to over 400,000 in 2022.

Finally, buried amongst all the census statistics is the little known fact that Alaska, as a state, has the largest migration rates of any state.  Between 35,000 and 50,000 people move both in and out of Alaska EVERY YEAR.   That’s a major factor that keeps our housing market so active whether it’s  in Anchorage or the Mat-Su Borough, our neighbor to the north.

Want to learn more about what will happen in the year to come for real estate? Join us from the comfort of your home or office when you sign up today for the 2022 Southcentral Real Estate Forecast as detailed above.

Thank you to my readers for your continued support and for the clients that have put their trust in our Realtors as we transitioned from Dwell Realty to Berkshire Hathaway HomeServices Alaska Realty. Our reach is global but our roots are local.